Meet Lil BUB ... the most amazing cat on the planet! Found as a kitten in the mysterious woods of Bloomington, Indiana, Bub was born extra special. She is fully grown at only 4 pounds, never grew teeth, has extra toes on each paw, her tongue pokes out, and some say she even knows magic! But despite BUB's small size and physical challenges, she defied the odds and has become one of the most loved cats in the world.

Touring around the world appearing on major talk shows like Good Morning America and The Today show, BUB uses her status to help raise awareness for homeless and special needs pets all over the world, and helps raise money for animals in need. In her 4 years on Earth BUB has written two books, hosted her own talk show called Lil BUB's Big SHOW, she has her own TV Special on Animal Planet called "Lil BUB's Special Special", and she's just released an album of her own music, called "Science & Magic". If BUB can do it, so can you!

Austin Folks, you're in luck! Lil Bub is coming to Austin for a visit! She will be making her appearance at End of an Ear record store Friday, Dec. 4th at 11:00 a.m.

Lil Bub is no stranger to to the camera. With green eyes like emeralds and whiskers for miles, Lil Bub is one photogenic cat! You'll love this small photo gallery of some of Bub's finest moments.

You've got to be Kitten' Me

Did you hear about the cat who swallowed a ball of yarn?

She had a litter of mittens

What is a cat's favorite color?

What did the alien say to the cat?

Take me to your litter

Where did the kittens go on their class trip?

For more LOLz check out BOOM magazine. A topic based online magazine filled with games, puzzles, jokes, and MORE!

Lil Bub on the Big Screen 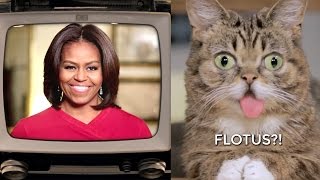 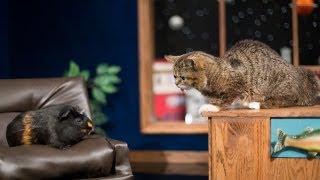 Lil Bub gets some constructive advice from a special friend

Did you know, Lil Bub was in a documentary called, ?

Little Bub is not only a cute, popular, and famous kitty, she brings happiness to people all over the world. Bub is living proof of the power and love animals have to offer!

Do you have a special pet in your life? Send us a photo or drawing of your favorite furry companion for the chance to be featured on our Awesome Board!

Send in your animals pictures and drawings